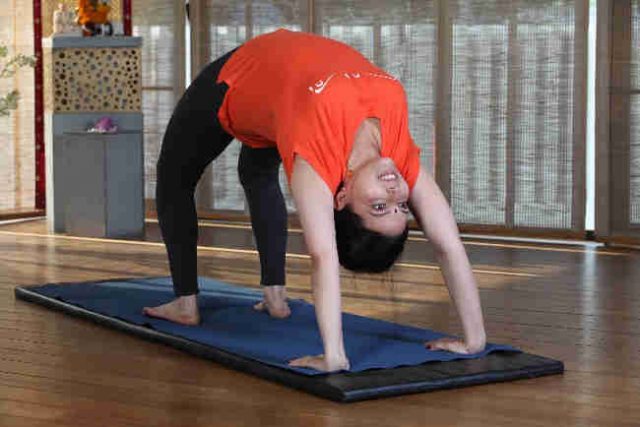 I met Guruji, Dr. B.K.S. Iyengar in 1996, at the lowest point in my life; and there was no looking back after that. After suffering for almost 12 years and being virtually bedridden, when I had to use a wheelchair I felt that all doors had closed for me. I felt utterly helpless and hopeless. Doctors said that I could never ever live a normal life again. Spinal surgery was presented as my last option, as I had suffered a slipped disc at the age of 15; and as no x-ray revealed this at the time, the condition was not treated properly. I was so disheartened that I wrote, ‘I Can Never Ever Become Alright Again’ on a paper with a bold, black marker, and stuck it on my study table. It was impossible for someone as young as I was to accept that she had become an invalid.

Luckily, Guruji diagnosed my problem without even looking at my MRI reports. He only needed a glimpse of the part of my neck that was visible above the t-shirt to know what the problem was. In that moment, I realized how learned he was. That was when I decided to surrender myself fully to his knowledge and experience. It was an instant connection, like that between a mother and child

Read the full article here in our July 2020 issue

An ardent disciple of Yogacharya BKS Iyenger, renowned yoga guru Nivedita Joshi holds a Master’s degree in Microbiology. After facing challenging health issues at a very young age, and a re-birth of sorts through yoga, she decided to dedicate her life to yoga. Ms. Joshi is also a published poet and a lyricist. She has written and published ‘Yogikasparsh’ a one-of-its-kind yoga manual in braille, for which she was awarded the ‘First Ladies’ Award’. Delhi’s first accredited Iyenger yoga centre, Yogakshema, is one of the biggest and best equipped Iyenger yoga centres in the world.