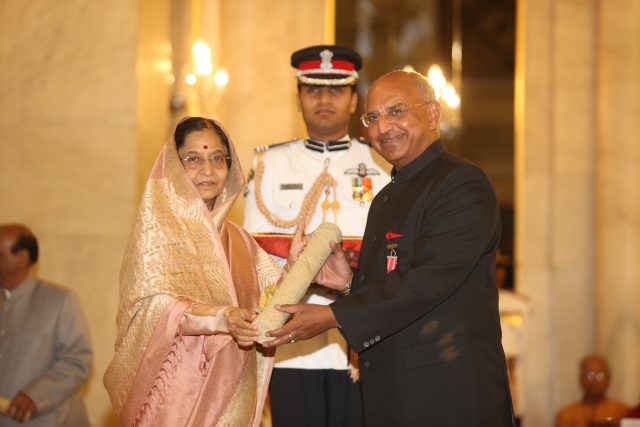 I call myself an ‘accidental entrepreneur’ because there were too many (happy) accidents that have brought me to where I am today! For me, the battle to become a doctor began soon after the realization at the age of 15, that even though I was the best cadet in NCC Navy at the Modern School, New Delhi, I could not join the National Defence Academy to become a fighter pilot in the Navy, as I was mildly myopic. I did not have Biology as a subject in school as I had a mistaken belief that by studying the alternative subject Geometrical Drawing, I would be better able to chart the course of the ship, in this case an aircraft carrier. My indifference to anything medical probably started when as a little boy. I used to be foxed as to why my father – late Dr S K Lal, a renowned Pathologist – would kill the rabbits that I loved playing with, in our house that also had my father’s pathology laboratory. I learnt it later that the rabbits were sacrificed to study their ovaries after they were injecting with a lady’s urine for the only available pregnancy test at the time – the Friedman Test.

As things turned out, I took over the lab after the untimely demise of my father in 1977. At that time, I was a lecturer in Pathology at Armed Forces Medical College (AFMC), Pune, and the Assistant Warden of the boys’ hostel. When I joined my father’s pathology practice, I thought that I knew everything that needed to be known in pathology. One can imagine my disbelief when I discovered the shortcuts and cutting of corners that were taking place in lab testing. So, it was no surprise that my first couple of years in private practice were completely spent in making home brewed reagents for biochemistry and other tests. This involved ordering raw material from abroad, as imported reagents or for that matter anything imported was banned in India, using single pan mettler electronic balances, using very sensitive pH meters, surveying the market and installing the latest spectrophotometers, single well gamma scintillation counters, pipetting dangerous radioactive material by mouth, as the hand-held automated pipettes were not available in India at that time, and many such mundane laboratory chores. And thus started my indoctrination in the beautiful world of private pathology practice.

The blood test is the most frequently prescribed investigation in medicine. In fact, diagnostic testing is the bedrock of modern evidence-based medicine, where 70% of all medical decisions are taken on the basis of lab reports. Today, Dr Lal PathLabs is a household name and the largest lab diagnostics chain in India with a network of 280+ clinical laboratories, 4,000+ collection centres and 9,000+ pick-up points across 1,500+ cities. Last year, we served over 20 million patients, processed 50 million samples; servicing one hundred thousand patients per day. In the ongoing covid pandemic, we have already performed more than 3.5 million RT-PCR tests. I could not have imagined this when I took over the reins of the lab in 1977.

Having inherited my father’s entrepreneurial spirit, I was not satisfied with only the routine working of the business. I had a strong zeal to introduce new tests, more accurate testing methods, sophisticated high-end equipment, and cutting-edge technology that could benefit patients and their doctors. This in turn revolutionized the Medical Diagnostics Industry in India.

Looking back at this journey of more than four decades, some game-changers that shaped my entrepreneurial journey, Dr Lal PathLabs’ expansion, as well as the Indian diagnostics industry at large, include:

All of this helped us stay ahead of the competition in a sea of about 3,00,000 labs that are currently operational in the country. Unfortunately, a large proportion – about 47% – of the players in the diagnostics field standalone labs are operating without adhering to any quality protocols; these constitute the un-organized sector within the diagnostics service industry and can be called ‘testing shops’ rather than pathology labs. Diagnostics has also emerged as one of the fastest growing service verticals in India, valued at USD 9.5 billion, with an estimated CAGR of 11% over the next five years. Increasing income, ease of access to testing, rising awareness about health monitoring, preventive and wellness testing, coupled with high incidence of lifestyle diseases – that now account for 65% of all deaths in the country – are factors that have been instrumental in driving the demand for diagnostics services. However, at a national level, we are still far from providing quality essential diagnostic services for all at affordable prices.

Further, being in the business of healthcare, self-imposed ethical conduct becomes especially important. With the life-or-death stakes, sensitivity of healthcare data as well as ease and experience of the patient is of paramount importance. We must always put the patient first and ensure that quality healthcare services are delivered at all times.

The last two years have been challenging for all due to the pandemic. But, at the same time, everyone has witnessed the important role that health, healthcare system, healthcare professionals and providers play in nation building. I hope our learnings from the pandemic are not forgotten easily and that the younger generation strives to improve health and wellbeing of all. In the coming years, the healthcare industry will emerge as a lucrative field for professionals and entrepreneurs.

I have three key points of advice that I would like to give to the younger generation:

Oprah Winfrey said, and I quote, “The big secret in life is that there is no secret. Whatever your goal, you can get there if you’re willing to work.” I truly believe that those who put in sincere efforts eventually succeed, whatever profession you are in. Never let the fire in the belly die!

(Hony) Brig Dr Arvind Lal, Executive Chairman of Dr Lal PathLabs, is credited with modernizing Indian medical diagnostics and bringing laboratory services in India at par with the western world. He also led Dr Lal PathLabs to the first Private Public Partnership in the field of laboratory testing in India. In 2009, Dr Lal was conferred with the Padma Shree award for his contributions to the field of medicine. Dr Lal is also the first civilian doctor to be granted an honorary Brigadier’s rank in the Armed Forces Medical Services by the President of India. He is the recipient of All India Management Association (AIMA) ‘Entrepreneur of the Year’ award 2016, FICCI ‘Lifetime Achievement Award’ 2017, and EY ‘Entrepreneur of the Year’ Award in Healthcare 2019, amongst several other awards and recognitions. He has authored a book 'Corporate Yogi: My Journey as a Spiritual Seeker and An Accidental Entrepreneur’.

Trends in Retail – The Rising Significance of OMS